We are pleased to announce an upcoming online workshop with Drs. Lynda and Michael Thompson. The event is being organized in collaboration with Neuronus in Brazil and will be offered in English, with simultaneous translation to Portuguese and Spanish.

This on-line workshop will focus on understanding the functions of each Brodmann Area  then on how networks connect many Brodmann Areas in the cortex to regulate thinking, feeling, and behaviour. The principle broad networks are the Executive (including attention and memory), Affect, Salience, Default, and Placebo systems. More than one network, and thus many Brodmann areas often from quite diverse areas of the cortex, are involved in any given syndrome or ‘disorder’. Symptoms that typify disorders do relate to functions of Brodmann areas and networks, so we will match networks and Brodmann area functions to symptoms that are found in many disorders, such as difficulties with attention span, executive functions (including memory and learning), emotions (including depression and anxiety). This will involve describing the networks noted above and giving EEG, Charts of Standard deviations from database for each Brodmann Area on y-axis versus Frequency on the x-axis,  brain map, Evoked Potentials, Heart Rate Variability,  and LORETA examples from patients who presented with diagnoses including: Concussion, ADHD, LD, Asperger’s, Autism, Anxiety and Depression.

The presenters hope to give the participants the kind of overview that will help the clinician gain a general understanding of how to relate areas that we can identify in our patients using the QEEG and LORETA analysis to the functions that we can influence using neurofeedback combined with heart rate variability training as tools for intervention. Neural Networks require that we understand how one function may be targeted while other functions are inhibited, and this will be outlined. The approach presented at this workshop involves the practical application of functional neuroanatomy for neurofeedback providers.

Michael Thompson, M.D. devotes his time to the administration of the Biofeedback Institute of Toronto and teaching about neurofeedback plus biofeedback. When formerly practicing medicine he was Medical Director of London Psychiatric Hospital; Associate Professor and head of post-graduate education in Psychiatry, University of Western Ontario; examiner for the Royal College of Physicians (Canada) for 10 years and chairman of their examinations committee in psychiatry. Numerous professional publications include A Resident’s Guide to Psychiatric Education. While Associate Professor, University of Toronto, he was psychiatric consultant to The Hospital for Sick Children’s neurology department and director of a centre that specialized in treating pre-school children with autistic spectrum disorders. Recent work has included  more than 200 professional presentations and workshops on 5 continents and in more than 26 countries focused on assessment and training using EEG and peripheral Biofeedback. Before beginning work in Neurofeedback, Dr. Thompson had more than 30 peer reviewed journal publications, 7 professional textbook chapters, 1 book and more than 100 presentations with a major focus on training psychiatrists, child development, attention deficit, learning, autism, and handling neurological illnesses. Since beginning a centre for biofeedback he has published with Dr. Lynda Thompson, 8 book chapters, and 20 journal articles on ADHD, Asperger’s Syndrome, Concussion, NFB + HRV, and stress management, and 2 books: The Neurofeedback  Book:  An Introduction to Basic Concepts in Applied Psychophysiology and Functional Neuroanatomy – Organized with reference to networks, lobes of the brain, 10-20 sites, and Brodmann areas. Together with Dr. Lynda Thompson, they have been awarded: Lifetime Achievement Award from the Biofeedback Federation of Europe -  2010 and the Distinguished Scientist Award from the Association for Applied Psychophysiology and Biofeedback – 2016.

Lynda Thompson, Ph.D. is a Psychologist who has done teaching, clinical psychology, school psychology and owned learning centers. She became Executive Director of The ADD Centre in Toronto in 1993 after discovering the world of Neurofeedback and deciding to specialize in that intervention.  Her doctoral dissertation (1979) dealt with hyperactive children treated with methylphenidate. She is co-author with William Sears of The A.D.D. Book: New Understandings, New Approaches to Parenting Your Child. Since beginning a centre for biofeedback she has published 9 book chapters, and 21 journal articles with an emphasis on ADHD, Asperger’s Syndrome, Seizure disorders, concussion, and stress management. She takes an active part in the main organizations concerning biofeedback, is a past Board Member of both the International Society for Neurofeedback and Research (ISNR) and the Biofeedback Certification International Alliance (BCIA), and was Chair of the Education Committee and Treasurer of the Neurofeedback Division of the Association for Applied Psychophysiology and Biofeedback (AAPB).  With her husband, Michael Thompson, M.D. she co-authored The Neurofeedback Book: An Introduction to Basic Concepts in Applied Psychophysiology (2003, 2015). They have been invited to teach about neurofeedback and biofeedback in 26 countries on five continents and present frequently at professional meetings in these fields. Together they have been awarded: Lifetime Achievement Award from the Biofeedback Federation of Europe -  2010 and the Distinguished Scientist Award from the Association for Applied Psychophysiology and Biofeedback – 2016. 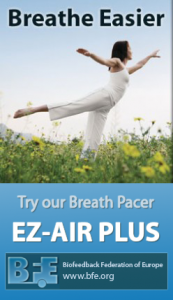